Discover Nicaragua volcanoes in just one week time: Mombacho and its natural reserve; Masaya, National Park hosting 5 craters; Ometepe Island, with the Concepcion located 5 300 ft above sea level and Cerro Negro, which last huge eruption was in 1999. A lot of hike is included in this package, so you really need to be in shape.

All taxes and service charges

Arrival at the International airport in Managua. Meet and greet by one of our representatives, private transfer will be provided to the hotel for your first night in Nicaragua.

Take an unforgettable journey to one of the most beautiful places of Nicaragua. Ometepe Island, the biggest island of the world on a fresh water lake. The excursion starts by heading towards the southern part of the country, getting to San Jorge's port where we will take a ferry that will take us to Ometepe, where you will be able to enjoy spectacular views and one of the most impressive ones of all Nicaragua. We will visit places like the, the Green Puddle's lagoon, Santo Domingo beach and “Ojo de agua” water springs.

With its 1610 meters, volcano Concepción is the higher and more prominent volcano on the island of Ometepe. The Concepción is a near perfect cone-shaped Volcano. During the challenging hike you will be able to see a great variety of plants and birds and enjoy some breathtaking views. But be aware, this volcano is active! Smoke is coming out of its crater, and there are other fumaroles on the volcano’s slope as well. Do you dare to climb the Concepción? You’ll need a lot of energy, stamina, and you should be in good condition to climb the Concepción. It is one of the toughest climbs in Nicaragua.

Founded in 1524 Granada is the oldest colonial city on the Isthmus; that heritage adds to the charm and character of the place today. Today's Granada is a delightful town, it's streets are lined with Spanish-style houses with large wooden doors opening onto cool interior patios. A wonderful walking city, although some buildings appear to be on the verge of collapse, many others have been beautifully renovated and now function as restaurant, hotel, or residential home. A great way to get a nice overview of the city is by ascending the towers of the La Merced church. Walk around the city on your own and enjoy delicious  lunch  at  “La Calzada”.

Around 4:00pm depart to Masaya Volcano where you will watch parrots returning to their unusual home: Santiago`s active crater. Take a walk into the heart of the earth through lava tubes while three different species of bats fly over your head. Learn about the history, geology and ecology of this particular volcano.

The Mombacho Volcano is one of the most prominent volcanoes in Nicaragua, located only 10 km from Granada. The ride uphill only is an adventure by itself. Whether it’s your own car or the truck you’re using, the incredible steepness of the volcano guarantees a spectacular ride. Explore a breathtaking view of the tropical forest of the Mombacho Volcano and enjoy a pleasant Canopy Zip Line Tour while enjoying close contact with nature. This tour is a combination of both Mombacho walking around the crater and Canopy with its 17 platforms - 3 Hanging Bridges - 11 Steel Cables with a height about 25 – 30 meters.

This tour gives you the opportunity to see the Ruins of the Old Leon City, first capital of Nicaragua founded in 1524 by Spanish Captain Francisco Hernandez de Cordoba. Differing from Granada, this city had to move to its actual location in 1610 due to a volcanic eruption. The Ruins of Old Leon City were declared World Site Heritage of Humanity by UNESCO in the year 2000. Leon was the capital of Nicaragua for over 200 years, until it was replaced by Managua in 1851.

Visit Leon’s Cathedral is the largest religious colonial building in Central America, the remains of the immortal and internationally well-known poet, Ruben Dario, are resting there. We will end our tour with a visit to the San Jacinto Thermal Muds, overviewing the impressive volcanic chain of Nicaragua.

Climb Nicaragua’s most active and youngest.  Around 650 meters in altitude is totally covered with black sand and rocks.

Standing on top of this volcano, you will have an immense view over a great part of the volcanic chain Los Maribios. However, the descend is probably the most fun part of the tour: you will be able to descend the steep slope by foot, using the sandy volcanic material to reduce speed.

Transfer to Managua International airport to catch your flight back to your country.

End of our service 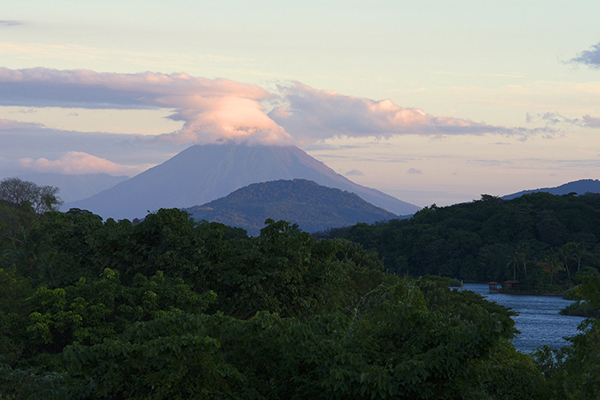