All taxes and service charges

Pick up at the International airport in Managua or the border between Costa Rica and Nicaragua, Peñas Blancas.  Transfer to Granada  for your first  night in Nicaragua.

Granada is the oldest colonial city on the Isthmus; that heritage adds to the charm and character of the place today. Today's Granada is a delightful town, it's streets are lined with Spanish-style houses with large wooden doors opening onto cool interior patios. Walk around the city on your own and enjoy delicious  dinner  at  “La Calzada”

Join us in exploring and discovering the famous city of Granada, established in 1524 by the Spaniard Francisco Hernandez de Cordoba, the oldest colonial city on mainland America and considered one of the prettiest cities in Latin America. Visit relevant sites and colonial buildings as well as the San Francisco Convent and Church founded in 1524, which preserves some of the most interesting indigenous ceramic and statue collections.

You will hear stories from real pirates, like the infamous Henry Morgan, and their adventures to civil war stories that burned toashes, sacked and destroyed the city several times. We will also visit archeological treasures from Isla Zapatera, a primitive art exhibit and historical display, La Polvora Fort, a warehouse built in 1748 to keep gunpowder. We will visit its old towers, which give you a beautiful view of the city. Xalteva Church and walls: Here the Spaniards met the Indigenous Xalteva population, from which it gets its name. This is the most antique part of Granada. The church was built during colonial times and because of its location, it was also used as a military fort.

The tour starts right before sunset, hike up  to the cross (La Cruz de Bobadilla) overlooking the volcano and the surroundings. Watch the Chocoyos (green parakeets) returning to their homes in the Santiago crater walls; somehow they adapted to the sulfur smoke from the volcano.

We will visit a few caves which was formed by lava streams and observe the interesting rock formations, learn about History and Geology. Observe a large number of bats depart massively from their caves, another great natural spectacle. The tour ends with a visit to a viewpoint that provides the possibility to actually look inside the crater mouth of the volcano, observing the red, glowing lava.

With its 1610 meters, volcano Concepción is the higher and more prominent volcano on the island of Ometepe. The Concepción is a near perfect cone-shaped Volcano. During the challenging hike you will be able to see a great variety of plants and birds and enjoy some breathtaking views. But be aware, this volcano is active! Smoke is coming out of its crater, and there are other fumaroles on the volcano’s slope as well. Do you dare to climb the Concepción? You’ll need a lot of energy, stamina, and you should be in good condition to climb the Concepción. It is one of the toughest climbs in Nicaragua

After breakfast, take the ferry transfer back to Managua.

End of our services 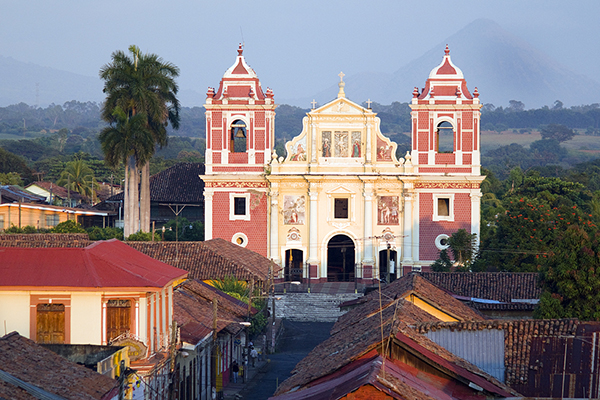